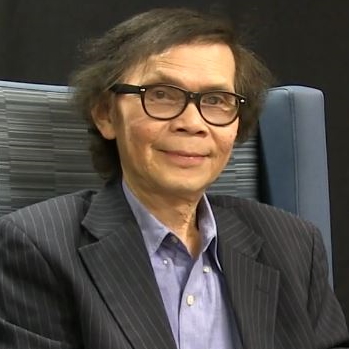 Dr. Truong Duy Nong was born in 1958 and grew up in Saigon (now Ho Chi Minh City) during the Vietnam War. At the end of the war in 1975, Dr. Nong’s father (a member of the South Vietnam army) was sent to a “re-education camp” and the rest of the family was forced out of their home to a New Economic Zone, or a jungle in Cà Mau province. Dr. Nong and his family survived by farming and fishing in the jungle until they were able to escape by boat to a UNHCR refugee camp in Thailand in February 1980. From there, they were sent to a Refugee Processing Center in the Philippines, and finally arrived in Charlotte, NC in November 1980. The family moved to Pasadena, TX in 1982 and initially made a living by managing a 7/11 convenience store. In 1985, Dr. Nong enrolled at the University of Houston to earn his degree in mathematics, and shortly afterward met his wife, and began teaching math at the Michael DeBakey High School of Health Professions. He left teaching after 14 years to pursue his passion of promoting democracy and civic involvement in Vietnam, founding The Institute for Civic Education in Vietnam (ICEVN) in October 2005. Today, Dr. Nong is the president of the ICEVN and continues to translate works of classical literature and philosophy into Vietnamese.