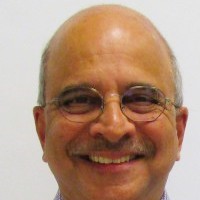 Shashank Karvé was born in Pune, India, and grew up in Mumbai. From a young age, he enjoyed working with his hands and building objects, and ultimately went to India Institute for Technology in Kharagpur to study Naval Architecture and Ocean Engineering. After graduating, he obtained a certificate in computer science from the Tata Institute of Fundamental Research, and moved to the United States to earn a Professional Engineering degree in Ocean Engineering at MIT. He began his career in the offshore industry at Brian Watt Associates in Houston, Texas in 1981. From there, Mr. Karvé would spend his career in top management roles and project development. The majority of his career was spent with MODEC, where he served as Chairman and CEO from 2000-2011. Mr. Karvé has a son, a daughter, and two grandchildren, who he and his wife, Medha, spends time bicycling with.