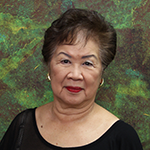 Martha Wong was born in Houston in 1939 after her parents moved from Mississippi so their children would have access to white schools during the segregation. She grew up living in the same building as her father's grocery store, and for some years, her family made up the only (unpaid) employees of the store. Her first language was English, at the choice of her parents who anticipated it would be more practical for her than speaking Chinese, which she never learned in depth. She attended the University of Texas at Austin, involved herself in several service organizations, and went into teaching after graduation. She took several years off from teaching as she and her husband started their family, and then quickly began rising in the Houston Independent School District as she added more and more administrative responsibilities, facilitated by her master's degree and eventual Ph.D. in education. Dr. Wong has also been a major originator and leader of Asian American community organizations, and this served as her springboard for election to the city council and the Texas House.