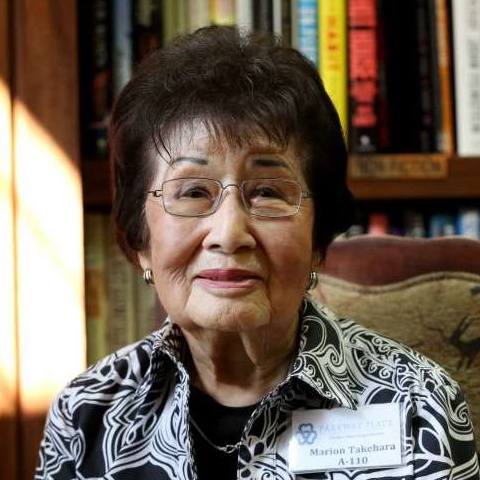 Marion Takehara was born in Los Angeles, CA in 1925. Her family had already been living in California since both her parents were young. Marion Takehara grew up in a mostly Japanese neighborhood in Los Angeles, California, and attended a mostly white school during her youth. She recalls very little discrimination during this time until Pearl Harbor completely changed the way she was treated by others. Her family soon became a victim of discrimination. After a matter of months, her family was moved, along with other Japanese in their community, into internment camps. Before their departure, these Japanese families were given little notice and many lost significant amounts of money due to closed businesses and loss of other investments. Mrs. Takehara's family was first relocated to a racetrack where they were forced to live in horse stables with limited food and water supply. Then, the family was relocated to Camp Amache in Southeast Colorado where Mrs. Takehara attended school for one year. She was then lucky enough to receive a scholarship to Simpson College, where she met her husband Kenneth Takehara. Although accepted to medical school, she instead decided to get married. She then worked as a Medical Technician before becoming an elementary school teacher. She now travels with her daughter to present the history of Japanese Americans in the United States, specifically with relation to Mrs. Takehara's own internment.