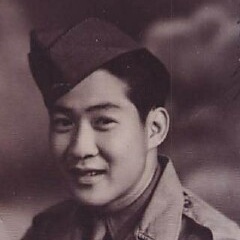 Mr. Lewis Woo Yee was born in Taishan, Guangdong, China in 1922 and immigrated to the United States in 1938. Mr. Yee attended middle school in China and received training for one year at the Air Force Training School learning technical skills in anticipation of the draft. During World War II, Mr. Yee served as a mechanic and co-pilot in the 14th Air Service Group at first in India and then in various locations in western and southwestern China alongside the group popularly known as the "Flying Tigers," all while holding the rank of staff sergeant. After the war, Mr. Yee owned or co-owned several restaurants and cafés including the China Star Restaurant, the North Star Restaurant, and Lewis's Branding Iron. In 1983, Mr. Yee became a founding board member of the Asian American National Bank of Houston. He became Chairman of the bank in 1992 and retired in 1997. Mr. Yee is a respected community leader and volunteer, having served as the President of the Chinese American Citizen Alliance and the Houston Yee Family Association while participating extensively in the Organization of Chinese Americans, and the American Legion Post #596 in Houston.