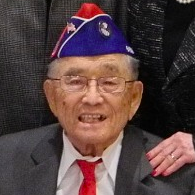 Kenneth Takehara was born on Maui in 1923 and grew up with only limited contact with his Japanese heritage despite years of Japanese language schooling. He felt very involved with the American environment in Hawaii, more so than he believes another Nisei like himself would have felt on the mainland, and volunteered in 1943 to delay his graduation from Simpson College in Iowa to volunteer and serve in the 442nd Regimental Combat Team in the European theater of World War II. Already working on a degree in biology before he enlisted, Mr. Takehara became an army medic after arriving in Europe. A recipient of two Purple Hearts and two Bronze Stars, he returned to earn a Master's degree at the University of Iowa, which began a career as a medical laboratory director, mainly in hospitals. He specialized in updating and modernizing labs, maintaining thorough knowledge of current technology, and also spent time teaching at the University of Maryland, even without a complete Ph.D.