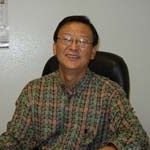 K. Casey Youn, Ph. D., the founder and the president of WEECO International, was born in South Korea in 1943. Dr. Youn moved to the United States in 1960 at the age of 17. Before moving to California, he was a senior of Kyunggi High School—an elite high school in South Korea. Once settled in California with his mother, he went to the University of California, Berkeley, to major in Chemical Engineering. Upon graduation, he moved to Princeton University, where he received his Ph. D. Then he joined Shell Oil Company's Emeryville Research Center in California. Three years later, in 1972, he relocated to Houston when Shell moved its research center to Houston. After working at Shell for 24 years, he retired early to start his own business. He founded WEECO International, which specializes in air pollution control.

Dr. Youn is also actively engaged in several different community organizations. He is the founder and the first principal of the Korean School, which was founded in 1977. Also, he serves as the director of the Korean Community Center. Moreover, he is committed to serving the Greater Houston Community as a member of the Greater Sharpstown Management District.