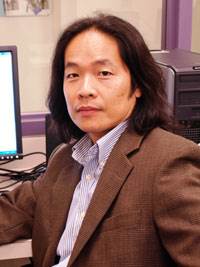 Hajime Jim Kumahata was born in Fukuoka, Japan in 1965. He grew up in a small town called Kofu, where he attended elementary, junior high, and the first two years of high school. Jim grew up in a family of four, and lived a typical Japanese teenage life. After his father encouraged him to study abroad, he became an exchange student and studied at Suring High School in Wisconsin. There, he lived with a host family, experienced American culture, and having gone back to Japan again, he decided to come back to the U.S. He got his music degree in Missouri, and later obtained his Masters in Linguistics at Cornell University. Jim had taught Japanese at Baylor University at Waco, Texas, for twelve years before he became part of the technology staff at Rice Center of Language. He is married to an American wife, and his son is a junior in high school. Jim still visits Japan from time to time, as he still holds onto his Japanese citizenship. He currently resides in a suburban neighborhood in downtown Houston.